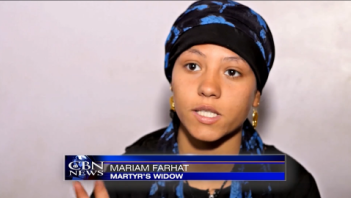 Ad Feedback
CAIRO, Egypt -- Imagine ISIS kidnapped a relative of yours and then you see their brutal beheading on television. Many different emotions can take over, including anger, grief, and depression.
CBN News found a group of Egyptian Christians, however, who responded much differently. They are happy their family members stood firm in their faith.
Widow Mariam Farhat told us she, "was very proud" that her husband "stood firm in his faith and that he didn't deny Jesus."
That surprising reaction is happening 150 miles south of Cairo, in the village of Al Aour.
Residents there honor the sacrifice of 21 Egyptians brutally murdered last February by ISIS. Their pictures are prominently displayed in the sanctuary of Virgin Mary Church.
Thirteen attended the church. The martyrs left behind family members like 23-year-old Farhat. She became a widow when the militants beheaded her husband Malak Ibrahim in Libya.
She first learned of his murder when she saw the now infamous video on local television.
"We were very sad for the first two days, but we hadn't seen the video," she recalled. "When we saw them in the video calling to Jesus we were very comforted."
And that's why Mariam and other families say they are now joyful, not sad.
Bebawy Al Ham's brother Samuel was among those killed.
"We were always praying that God would make them steadfast in their faith," Bebawy told CBN News. "We were very happy with what they said on the video: 'Jesus Christ have mercy on us.' When we found out they had been killed for being Christian, we were very comforted, because these were God's children and he took them."
Although Samuel's wife and children now live without a husband and father, his family told CBN News their faith is stronger; they forgive the jihadists, and even pray for ISIS.
"I pray for them that God may open their hearts, and they may know the truth and know that what they do is wrong and then do the right thing," Bebawy said.
"Jesus told us to forgive every sin and we forgive them and we hope that they can come to know Jesus," he said.
Egyptian Christians are encouraged to know they are not alone. In the United States there's a growing movement among Christians to demonstrate unity and solidarity with those who are suffering for Christ in the Middle East.
Rev. Patrick Mahoney, director of the Christian Defense Coalition, explained.
"What we thought was how could we identify and stand in solidarity with our brothers and sisters in Christ who are being brutalized around the world for their Christian faith?" he said. "What tangible thing could we do, what practical thing could we do?"
Immediately, orange jumpsuits came to mind. Mahoney and others launched the #orangejumpsuitcampaign. The movement has expanded to orange scarves, sweaters, and ribbons.
"It's to remind our brothers and sisters that we love them, and we're standing with them and to remind decision makers here in America and across the globe--the free nations of the world--we cannot be silent on this issue," Mahoney said.
He said the response has been amazing. Non-Christians have joined in as well.
"A Jewish rabbi, to stand in solidarity with persecuted Christians is dying his beard orange, which I think is incredible and I can't wait to see that," Mahoney said.
Mariam was encouraged after she viewed cell phone photos of Americans wearing orange.
"May the Lord make their love grow and grow. We are very happy with their love and we don't deserve their love," she told CBN News.
Mahoney said every five minutes around the world a Christian is killed for his faith.
"People don't understand the kind of barbarism and brutality they are going through," he said. "And you know when I visit persecuted Christians in the Middle East there is one thing that they always ask--it doesn't matter if it is Iraq, Syria, wherever it might be-- it's this: 'Please remember us!'"
And wearing orange on the job or at church helps people remember them.
"I think people need to understand that if we do not act quickly, the public expression of Christianity may be extinguished in the Middle East. As Elie Weisel, Holocaust survivor and Nobel Peace Prize winner, says, "we must always take sides. Silence only helps the oppressor, never the oppressed,'" Mahoney said.
Mariam also has a message for others who have suffered or still face danger from ISIS.
"Don't be sad or cry. God will support us all," he said. "And he will fulfill his promise that he is the father of the orphans and the widows."
Watch video: Joy in Jesus

Posted by Love For His People ministry at 10:24 AM