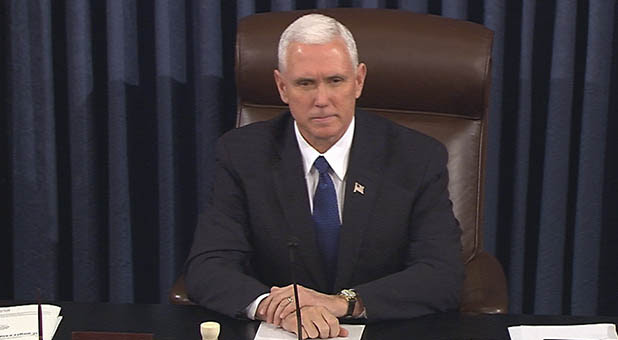 3/30/2017 BOB ESCHLIMAN  CHARISMA NEWS
Even with a 52-seat Republican Party majority, the U.S. Senate isn't as pro-life as you might think.
Thursday, Senate Majority Leader Mitch McConnell had to go to the bullpen, pulling in Vice President Mike Pence to cast the deciding vote on a joint resolution to disallow an Obama administration rule that required states to provide Title X funding to abortion providers—much of it going to Planned Parenthood. More than a dozen states have already adopted laws that pull that funding, but under the Obama rule—enacted in the final weeks of his presidency—states would have to forfeit the federal funding in order to fulfill their commitments to voters to fully "defund" Planned Parenthood.
Ahead of the vote, the Family Research Council urged its members to put pressure on their senators to vote in favor of the resolution. That wasn't enough to convince Sens. Susan Collins (R-Maine) and Lisa Murkowski (R-Alaska) to vote for the measure.
With all 48 Democrats and independent Sens. Bernie Sanders (I-Vt.) and Angus King (I-Maine) also voting against the resolution, the vote was deadlocked at 50-50. Pence cast the deciding vote in favor of the measure, which now goes to President Donald Trump for his signature—which should be a foregone conclusion, given Pence's vote.
Because the resolution was identical to one passed in February in the House of Representatives, under provisions of the Congressional Review Act, it was not subject to Senate cloture rules and could not be filibustered by Democrats.

Leaders are readers! Subscribe now and get 3 magazines for the price of 1. Get Ministry Today, Charisma and SpiritLed Woman all for $24. YES - Sign me up!
3 Reasons Why you should read Life in the Spirit. 1) Get to know the Holy Spirit. 2) Learn to enter God's presence 3) Hear God's voice clearly! Click Here to draw closer to God!
Posted by Love For His People ministry at 6:50 AM