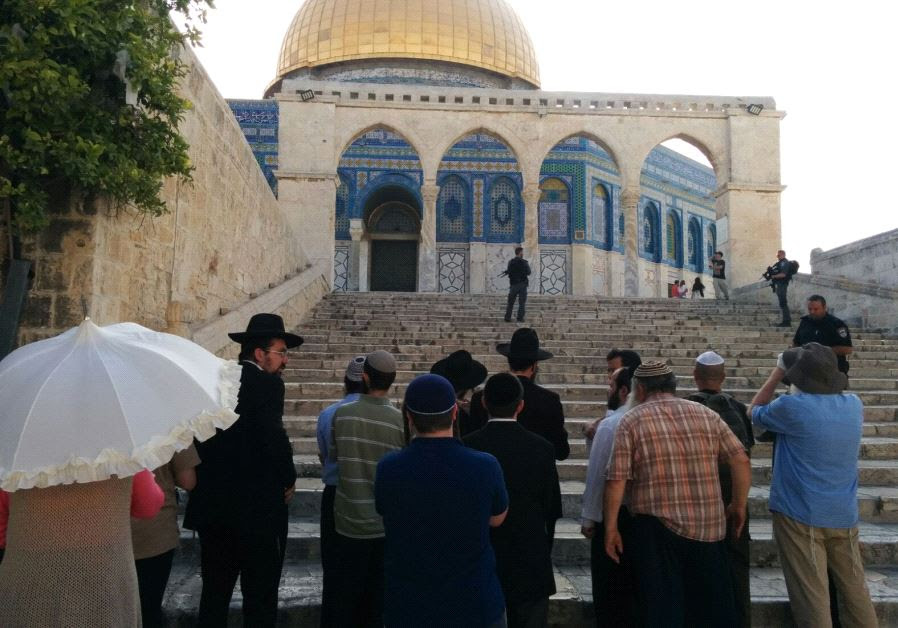 “If Moshe Dayan gave the Wakf the keys to the Temple Mount in 1967, then last week Prime Minister Benjamin Netanyahu gave over sovereignty of the Temple Mount to the Wakf,” said an activist.

As tensions in Jerusalem subsided over the weekend following two weeks of political and religious turmoil over the Temple Mount, the police face another potentially turbulent week with more than 1,000 Jews expected to visit the holy site on the Fast of the Ninth of Av this Tuesday.

Police spokesman Micky Rosenfeld said that security assessments are being conducted, noting that many thousands of people are expected to visit the Old City and specifically the Western Wall over the fast.

Specific visiting hours for non-Muslims at the Temple Mount will be based on those security assessments, but any disturbances which occur before Tuesday could alter arrangements.

The situation in the capital and surrounding the Temple Mount is still extremely sensitive, and the possibility of a new spike in tensions and violence is not being discounted.

However, Defense Minister Avigdor Liberman said on Saturday that he believed the crisis is almost over.

The defense minister also defended the way in which the metal detectors and security cameras placed at the entrances to the site, which led to the furious Palestinian reaction, were swiftly put up and then taken back down again.

“There is frequently no correspondence between security considerations and public opinion. The ability to take unpopular decisions is very important, even critical. I think we acted correctly, and I am happy that the cabinet gave its support to the Israel Police, who acted in an excellent manner.

“You cannot conduct security matters based on polls and emotions. The metal detectors are not the parameter [by which success should be measured], and I think that in retrospect we acted correctly.”

Complicating the security situation this week is the Fast of the Ninth of Av, commemorating the destruction of the First and Second Temples in Jerusalem, the exile of the Jewish people from the Land of Israel, and other catastrophes of Jewish history.

Asaf Fried, a spokesman for an association of organizations dedicated to Jewish rights on the Temple Mount, said that he expects more than 1,000 Jewish visitors to make their way to the site this year because of the “humiliating behavior” of the government last week.

“If Moshe Dayan gave the Wakf [Islamic trust] the keys to the Temple Mount in 1967, then last week Prime Minister Benjamin Netanyahu gave over sovereignty of the Temple Mount to the Wakf,” said Fried, speaking for the Joint Committee of Temple Organizations.

“People are very angry. The government’s behavior last week was humiliating and degrading, and we have been receiving many calls about how to practically prepare, religiously, for visiting the Temple Mount,” he continued.

Asked whether, in light of the emotions, he expected Jewish visitors to defy the ban on non-Muslim prayer at the holy place, Fried observed that many Jewish visitors often pray individually despite the ban, but do so in a discreet manner.

He also said that the police are not stringent about searching out such possible infractions when there are large numbers of Jewish visitors, although he added that any attempts at demonstrative Jewish prayer would not be tolerated by the police.

Last year on the Fast of Av, Fried said, some 400 people visited the site, and he expressed hope that the large number of visitors this year “will cover up what happened last week to some extent.”

Although the Friday prayers at the Aksa Mosque on the Temple Mount were widely expected to end with more riots, the prayers and their aftermath passed off peacefully, with thousands of Muslims attending the prayers and dispersing calmly afterward.

Security was high in the Old City with large numbers of Israel Police and Border Police personnel present.

Posted by Love For His People ministry at 6:40 AM