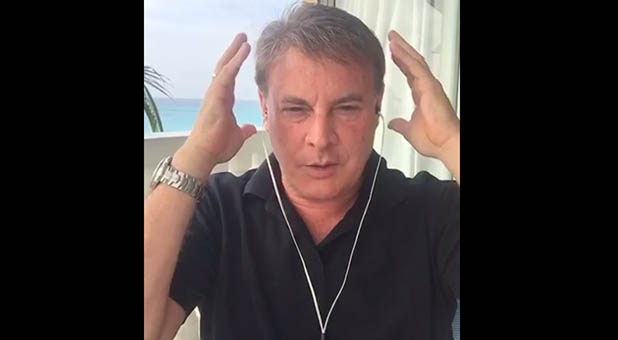 Dr. Lance Wallnau prayed, not only for President Trump in a Thursday Facebook Live video, but also for his family and those who work with him. (Video screenshot image)

The last couple of weeks have been particularly difficult on President Donald Trump, but even more so for his family and those who work with him, and that was the focus of the latest call to prayer Dr. Lance Wallnau made Thursday during a Facebook Live video, which you can see above.
"Witches have been releasing tens of thousands of curses against Trump," he said. "I found something out. People were praying for me, you know, at the inauguration. I got out of a vehicle before it got jumped by the goofball Antifa crowd, who destroyed windows, looted property, had a hundred people put in jail and had a lawyer who then got arrested with them.
"This is a machine, my friends, a demonic machine is out there. Before they could torch my limo, burn it to the ground and injure my driver, we got dropped off. So, I'm thankful for the prayers at the inauguration that kept my wife and me from harm."
But, Wallnau noted, most of the prayers had been directed only at his safety, not also for those around him. And, later, his wife fell and injured her wrist. He took that message to heart and shared with his online audience that we shouldn't just pray for the president, but also for his family—and given the current headlines, that's probably not a bad idea.
"As you watch this machine, this vicious machine that—basically, politics is all about destruction of your opponents," he said. "It's not about the debate of ideas anymore. It's about annihilating your opposition.
"[The president]'s watching his kids get torn apart. So, he needs his family. What's wrong with family? Any Christian should say the family should be together, especially when the father leaves the business world to go save a nation and to go lead it. He needs all the family he can have because he's got so many ideological enemies out there."
Wallnau prayed for the president, his wife, the president's sons, daughter and son-in-law, and he even prayed for Attorney General Jeff Sessions and for Sen. John McCain. Having heard another prophet suggest the president may suffer a stroke, he made another intercessory prayer to "veto that stroke in Jesus' name."
His video was eventually cut off due to technical difficulties—or perhaps the devil was unhappy with his message—but not before he shared some tough love for Pentecostals who have not yet taken action in the spiritual warfare that surrounds the Trump presidency. He said a number of them have lamented, "Why didn't we get a goodie-two-shoes president?"
Wallnau, following through on an earlier promise to say something "terribly controversial," said it's because Christians didn't deserve one, and even if they had gotten one, they probably wouldn't have shown up for him.
"We're out in spiritual la-la land thinking the world is going to change because we're having another prayer meeting with a prophecy over it. Not gonna happen," he said. "There's a deception in the church. The deception is this: The spiritual realm is somehow separated from the earthly realm.
"God took Adam and breathed the breath of life in him. Man functions as a physical being with a spiritual authority. Christians who keep going off to Spirit land and doing whatever there on a spiritual vacation and take their lobotomy out of the natural realm and say that everything is spiritual and say all they got to do is get more spiritual—now they're up in the courts of heaven teaching, and all thinking it's all going to resolve itself.
"I tell you what. You win a battle in the courts of heaven and don't go through the action on earth, opening your mouth and advocating your cause, and speaking the truth, and proclaiming the truth, then you are vetoed. Not because you didn't do your job in spiritual warfare, but because you didn't follow it up with corresponding action. It means nothing for you to do a sacrifice to God before battle and then not show up and go into battle.
"Joshua would not have taken a single mountain if he had followed today's Pentecostal theology about everything's in the spirit realm and nothing is in the natural realm. Well, at some point, you've got to walk over into the natural realm."

Readers are Leaders! Subscribe now and get 3 magazines for the price of 1. Get Charisma, Ministry Today and SpiritLed Woman all for $24. YES - Sign me up!
3 Reasons Why you should read Life in the Spirit. 1) Get to know the Holy Spirit. 2) Learn to enter God's presence 3) Hear God's voice clearly! Click here to draw closer to God!
Posted by Love For His People ministry at 6:45 AM

His Plan. His Way. New book by Steve Martin