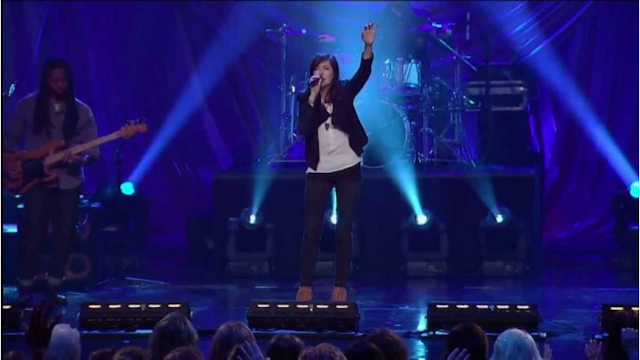 The Grammy Winner the Media Ignored: The Holy Spirit

2/16/2016 JESSILYN JUSTICE  charisma news
Join us on our podcast each weekday for an interesting story, well told, from Charisma News. Listen at charismapodcastnetwork.com.
You go, Taylor Swift! And what was up with Adele's sound? Did you see that Hamilton performance?
The 2016 Grammy Award headlines fill social media streams, but few mention how the Holy Spirit won.
"Holy Spirit," which proclaims: Holy Spirit, you are welcome here/Come flood this place and fill the atmosphere won best contemporary Christian music performance by Francesca Battistelli.
"I'm so grateful for @BryanTorwalt & @katietorwalt. They wrote an incredible song, & the Lord is honoring it! I'm thankful to get to sing it!" Battistelli tweeted after the win.
Other Christian winners include TobyMac for Best Contemporary Christian Music Album and Kirk Franklin for Best Gospel Performance/Song.

Francesca Battistelli took home her first Grammy Award for Best Contemporary Christian Music Performance/Song for “Holy Spirit.” The song is from her 2014 album, "If We’re Honest," an album that netted three Grammy nominations. Battistelli, who is anticipating the birth of her third child, was unable to attend the 58thAnnual Grammy Awards, which took place Monday, February 15 at the Staples Center in Los Angeles.

“Holy Spirit” (written by Bryan and Katie Torwalt) spent 15 consecutive weeks at No. 1 and topped 5 radio charts simultaneously in 2015, becoming her third consecutive No. 1 from the album, If We’re Honest, following “Write Your Story” and “He Knows My Name.”
This Grammy Award win caps off an extremely fruitful awards season. Francesca was voted Female Artist of the Year at the KLOVE Fan Awards last spring, received her first Billboard Music Awards nomination, and received three more nods at the 2015 GMA Dove Awards.

Posted by Love For His People ministry at 6:51 AM