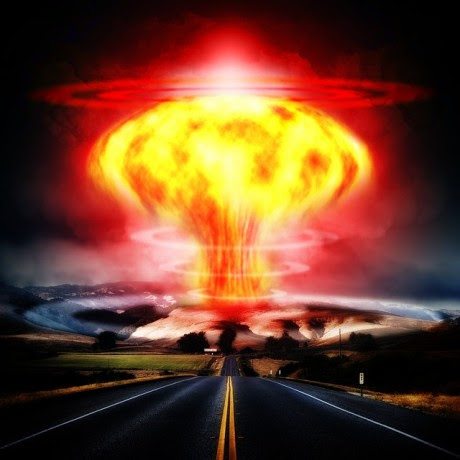 Saudi Arabia already has nukes, Iran probably does, and the Russians are one of the two great nuclear powers on the entire planet.  So if Saudi Arabia, Turkey and their Sunni allies do decide to conduct a full-blown ground invasion of Syria, could someone ultimately decide to use nuclear weapons when their backs get pushed up against a wall?

As you read this article, there are thousands of military vehicles and hundreds of thousands of troops massed along the southern border of Turkey and the northern border of Saudi Arabia.  If the command is given and those forces start streaming toward Damascus, it is inevitable that the Syrians, the Iranians, Hezbollah and the Russians would fight back.  It would literally be the start of World War 3, and the Saudis and the Turks are trying very hard to convince the United States to be involved.

But the truth is that we don’t want any part of this conflict, because it could very easily become the very first nuclear war in the history of the Middle East.

Perhaps you didn’t know that the Saudis already have nukes.  Of course the official position is that they don’t, but it is a fact that they were the ones that funded the development of Pakistan’s nuclear program.  It is an open secret that the Saudis have the bomb, but nobody is really supposed to talk about it.


Earlier this week a Saudi political analyst told RT’s Arab network the kingdom has a nuclear weapon.
Dahham Al-‘Anzi made the claim while saying Saudi Arabia is engaged in an effort to “minimize the Iranian threat in the Levant and Syria.”
Although Saudi Arabia has officially denied it has a nuclear weapons program and has publicly stated it opposes nuclear weapons in the Middle East, it has funded a military nuclear program and received scientific assistance from the United States and Pakistan.

You can watch video of this exchange right here…

If you don’t want to believe him, perhaps you will believe the former director of the CIA counter-terrorism operations center.  He told Fox Business that everyone in the intelligence world knows the Saudis have nukes…

If the fur started flying in Syria and Russia and Iran decided to start bombing Saudi airbases, would Saudi Arabia resort to using their nukes?

In the event of a massive ground invasion by Saudi Arabia, Turkey and their allies, it is actually more likely that Russia may decide to be the first one to use nukes.  An invasion force of hundreds of thousands of troops would vastly outnumber the relatively small Russian force that is already inside Syria, and so the Russians may feel that the only way that they can keep the Sunni powers out of Damascus is to use tactical nukes.

Russia has more tactical nukes that anyone else in the world by far, and there are some reports that indicate that Russia may be prepared to use them in Syria.  For example, former Associated Press reporter Robert Parry, the author of America’s Stolen Narrative, says that a source has told him that the Russians have already warned Turkey that this could potentially happen…


If Turkey (with hundreds of thousands of troops massed near the Syrian border) and Saudi Arabia (with its sophisticated air force) follow through on threats and intervene militarily to save their rebel clients, who include Al Qaeda’s Nusra Front, from a powerful Russian-backed Syrian government offensive, then Russia will have to decide what to do to protect its 20,000 or so military personnel inside Syria.

A source close to Russian President Vladimir Putin told me that the Russians have warned Turkish President Recep Tayyip Erdogan that Moscow is prepared to use tactical nuclear weapons if necessary to save their troops in the face of a Turkish-Saudi onslaught. Since Turkey is a member of NATO, any such conflict could quickly escalate into a full-scale nuclear confrontation.

Given Erdogan’s megalomania or mental instability and the aggressiveness and inexperience of Saudi Prince Mohammad bin Salman (defense minister and son of King Salman), the only person who probably can stop a Turkish-Saudi invasion is President Obama. But I’m told that he has been unwilling to flatly prohibit such an intervention, though he has sought to calm Erdogan down and made clear that the U.S. military would not join the invasion.

Are you starting to understand how serious this is?

With all of the talk of a potential invasion in recent days, the Russians are on high alert and are rapidly preparing for a direct conflict with both Saudi Arabia and Turkey.  The following comes from Infowars…


Still, the Russians are taking no chances and they have put all their forces into high alert. They have very publicly dispatched a Tu-214r – her most advanced ISR (Intelligence Surveillance Reconnaissance) aircraft. You can think of the Tu-214R as an “AWACS for the ground”, the kind of aircraft you use to monitor a major ground battle (the regular Russian A-50Ms are already monitoring the Syrian airspace). In southern Russia, the Aerospace forces have organized large-scale exercises involving a large number of aircraft which would be used in a war against Turkey: SU-34s. The Airborne Forces are ready. The naval task forces off the Syrian coast is being augmented. The delivery of weapons has accelerated. The bottom line is simple and obvious: the Russians are not making any threats – they are preparing for war. In fact, by now they are ready.

In addition, it is important to remember that it is quite likely that the Iranians have nuclear weapons as well.

Of course the U.S. government and the Iranian government both insist that Iran does not have nukes, but many of those in the know insist otherwise.

For instance, you may want to consider what retired U.S. Army Major General Paul Vallely and U.S. Air Force Lt. Col. Dennis B. Haney are saying.  The following comes from an article that was authored by Jerome Corsi of WND…


In a joint statement, Vallely and Haney say an accumulation of available evidence shows a coalition of Russia, China and North Korea have assisted Iran since 1979 in achieving a nuclear weapon, despite sanctions, under the guise of a domestic nuclear energy program.
Vallely explained to WND that he and Haney have taken a systematic approach to evaluating each component needed to deliver a nuclear weapon, from the development and testing of a ballistic missile system, to the design of a nuclear weapons warhead, to the development of the weapons-grade uranium needed to produce a bomb.
“To come to our conclusion that Iran is a nuclear weapons power right now, we supplemented publicly available research, plus information from intelligence sources, including Iranian resistance groups such as the National Council of Resistance of IRAN, NCRI,” Vallely explained.

I happen to agree with Vallely and Haney.  I cannot prove it, but all of the intel that I have received indicates that Iran already has nukes.

Hopefully I will not be proven accurate any time soon.

It had been hoped that a cease-fire could be negotiated that would at least temporarily defuse tensions in Syria.  Unfortunately, it does not look like the shooting is going to stop, and this is going to put immense pressure on both Saudi Arabia and Turkey to do something to rescue the radical Sunni militants that are on the verge of defeat.  The Saudis, the Turks and their allies have poured enormous amounts of money and resources into this war over the past five years, and now they are faced with the choice of either accepting defeat or directly intervening in this conflict themselves.

But in order to conduct a full-fledged ground invasion, they are going to need justification for doing so.  There are some that are suggesting that we could soon see a false flag attack that would provide that justification, so that is something to watch out for.
I can’t remember a time when our planet has been so close to World War 3 potentially beginning.

And if it does break out, I believe that it is quite likely that nuclear weapons will be used.

So what do you think?

Do you agree with me?

Posted by Love For His People ministry at 7:03 AM