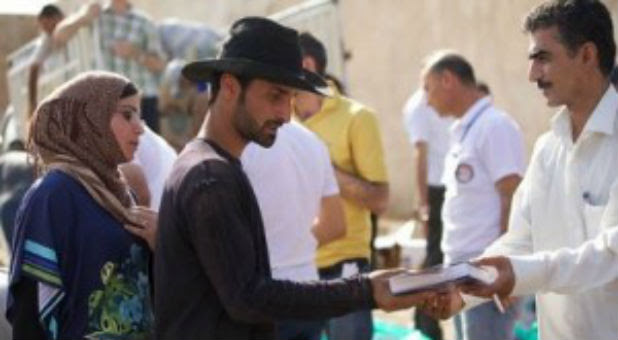 
Join us on our podcast each weekday for an interesting story, well told, from Charisma News. Listen at charismapodcastnetwork.com.
ISIS targeted more Muslim-populated areas in Syria on Sunday. According to reports, the attacks left at least 140 dead in Damascus and Homs. These attacks were the deadliest of Syria's five-year war.
Citing a monitoring group, the BBC reporting a double car bombing in Homs. Later in Damascus, four or more blasts killed and injured people, according to Syrian state media.
Both attacks were targeting minority groups. In Damascus, the explosions took place in Sayyida Zeinab, the location of the holiest Shia Muslim shrine.
ISIS has claimed responsibility for the attacks.
"It is dangerous, but we're hearing kind of one side of the story, a lot of times through the news media," explains Dyann Romeijn with Vision Beyond Borders (VBB).
"Not to discount the things [ISIS is] doing to the Christians, but at the same time, there's this knowledge among Muslims because the Muslims are also being persecuted. Certain Muslim groups that [ISIS doesn't] perceive as radical enough are being persecuted."
Sunday's attacks took place during ceasefire talks. This is the second time attacks have happened in the last several weeks during the process of ceasefire discussions. The first time, the talks were delayed. But now, U.S. Secretary of State John Kerry has said a "provisional agreement" has been reached with Russia, according to the BBC.
There is both joy for the agreement and grief for a devastating loss in the war-torn nation.
Millions of minorities and Syrians have fled their home countries from the terror of ISIS, leaving everything behind, including family members. In Lebanon alone, nearly one in every five people is a refugee.
Romeijn explains this crisis is different than most others. "One of the things that's overwhelming that we are seeing in this crisis more than some of even the others is that the majority of these families were actually middle-class families before ISIS came in."
The people had secure homes and jobs, but the persecution of ISIS drove them away and cost them everything.
A VBB worker relayed the story of one man who'd saved up $50,000 for retirement. But, ISIS took it all away and left him with nothing.
Yet despite the grief, Romeijn says God is moving. The people are being pushed into areas that are safer from violence and safer to share the gospel. Because less-radical Muslims are being persecuted and fleeing, they are also witnessing the love of God.
"The Muslims are seeing the truth of Islam. They're having their eyes opened, and there's a turning to the gospel in great numbers. The Christians are the ones who are reaching out to people. They're the ones who are there to help."
A revival is taking place as Muslims turn to Christ, and VBB wants to seize the moment that God has given.
VBB has printed 20,000 Arabic New Testament Bibles and is giving them to refugees. The Bibles have study notes in order to make it easier for Muslims to understand.
Romeijn explains a New Testament is currently more beneficial to the people than an entire Bible because they will likely start at the very beginning of the book. A New Testament will immediately tell the gospel story, whereas an entire Bible will contain rules Muslims might get caught up in.
But VBB knows they have more to do. "If you just tell [Muslim refugees] that Jesus loves them and hand them a Bible when they're starving, they can't even comprehend. But we need to meet their physical needs as well."
VBB is meeting physical needs by providing food, clothing, hygiene kits and more. When they see genuine interest and care, Muslims want to hear about the gospel. They're accepting the Bibles graciously, and Romeijn says more than 1,000 have already been handed out by VBB.
Refugees could also use your prayers. After all, only God can bring peace.
"There are over 6 million that have fled. It's obviously not something that one person is going to meet the needs for or one organization. It's got to be the body of Christ."

For a limited time, we are extending our celebration of the 40th anniversary of Charisma. As a special offer, you can get 40 issues of Charisma magazine for only $40!
NEW from CHARISMA: Do you want to encounter the Holy Spirit and hear God speak to you? Increase your faith, discover freedom, and draw near to God! Click Here
Posted by Love For His People ministry at 9:16 AM