Holy Land Prayer Event for Empowering Next Generation in Jerusalem 2015 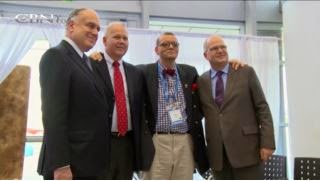 for Empowering Next Generation


Christians around the world plan to gather in Jerusalem next year at Pentecost to pray for a fresh outpouring of the Holy Spirit on a new generation.

Empowered 21, a global relational network between pentecostal and charimatic Christians worldwide, is organizing the congress, which they hold every five years.

Oral Roberts University President Billy Wilson heads Empowered 21. He says they expect people from around the world to converge on Jerusalem in May 2015.

"It's Pentecost Sunday week. So as we prayed about where to have this event, this five-year Congress, we really felt drawn to have this Pentecost week in Jerusalem to really pray for a fresh Pentecost, a new outpouring of the Holy Spirit in our generation in the 21st century," he said.

Wilson says they want to focus on knowing what God is doing and helping this new generation to connect with that.

He said everyone who is interested in the Holy Spirit, the future, the next generation and unity should be involved in Empowered 21.

Posted by Love For His People ministry at 8:50 AM