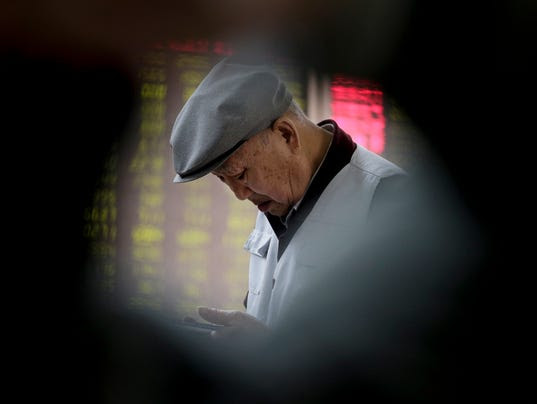 Jane Onyanga-Omara,  USA TODAY7:51 a.m. EST January 26, 2016
China’s benchmark index plunged more than 6% Tuesday, after a renewed slump in oil prices kept investors on edge about the global economy.​
The  dived 6.4% to 2,749.79 — its lowest close since Dec.1, 2014 — continuing weeks of volatility for Chinese stocks.
U.S. stock futures recovered to around 0.3% higher Tuesday.
Asian markets were down — Japan’s  index dropped 2.4% to close at 16,708.90 and ’s  lost 2.5%, finishing at 18,860.80 points.
In Europe, Germany's DAX index lost 0.5%, France's CAC 40 was down 0.4% and Britain's FTSE 100 was 0.7% lower.
fell to under $30 a barrel early Tuesday, before reaching $30.33 at 5.35 a.m. ET. It lost $1.68, or 5.2%, to $30.50 a barrel the previous day.
Investors in China were in near-panic in the absence of a shift in government policies and economic fundamentals, said Chen Yong, market strategist for Lianxun Securities. The approach of the Lunar New Year didn’t help, as players become reluctant to invest for fear of any unexpected sharp falls in overseas markets.
Michael Every, who heads Financial Markets Research, Asia-Pacific, at Rabobank, said: "It’s just another in a long series of slumps that we have seen in this market, and it’s not the last we will see either because the market is still overpriced. And too many people want to get their money out. It’s been a bubble since it began last summer.”
Every expects another 10% drop or more in Shanghai shares before things settle down. U.S. stocks ended lower Monday as oil prices dropped.