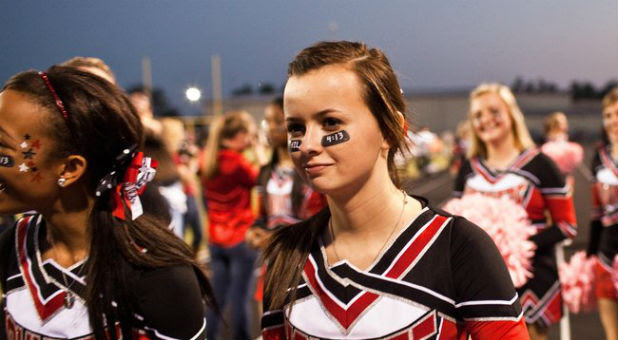 1/29/2016 JESSILYN JUSTICE  charisma news
Three cheers for the First Amendment, at least for the cheerleaders at a Texas high school.
A judge ruled this week that the Kountze Independent School district is "not required to prohibit messages on school banners . . . that display fleeting expressions of community sentiment solely because the source or origin of such message is religious."
The battle between the school district and the cheerleaders began in August 2012, with appeals going back and forth for years.
"We're just all Christians and believe the Bible is from God and so if it's from God, why not?" one cheerleader said at the time. "That's what we were thinking and it's a positive message and it's uplifting."
The girls were represented by the Liberty Institute.
"This is an 8-0 victory for the free speech and religious liberty rights of all Texas students," says Kelly Shackelford, President and CEO of Liberty Institute. "We are delighted that the court considered this case so straightforward that it did not even require oral argument." The battle is not yet over, though.
"In light of today's Supreme Court ruling, we look forward to defending the Kountze cheerleaders at the Court of Appeals and resolving this case permanently in the cheerleaders' favor."
Texas Supreme Court Justice Eva Guzman filed a concurring opinion, highlighting the precedent this case sets for religious freedom in schools.
Liberty Institute attorney Hiram Sasser says, "There is a great challenge in courts to students who express religious beliefs in schools."
"School officials are engaging in unlawful censorship of student speech and they need to be held accountable. We agree this is a serious problem. This case is a prime example for courts to help resolve that issue in favor of religious speech," Sasser says.

Posted by Love For His People ministry at 8:38 AM