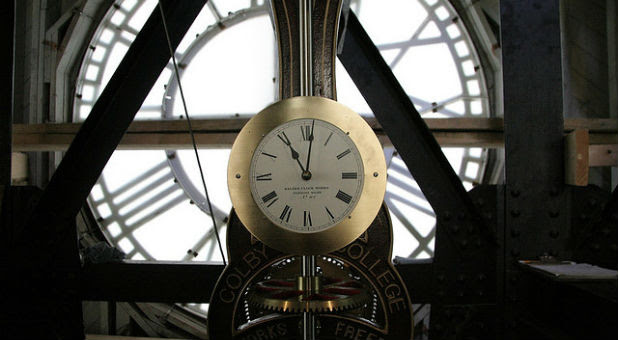 Join us on our podcast each weekday for an interesting story, well told, from Charisma News. Listen at charismapodcastnetwork.com.
Are we any closer to the end of the world? The scientists behind the "doomsday clock" are set to make an announcement detailing just how close we are to destruction, according to the Associated Press.
The Bulletin of the Atomic Scientists have been predicting the end of the world in terms of "minutes to midnight," based on world events like nuclear threats, political leadership and weapons treaties, since 1947.
In 2015, the world was listed at "3 minutes to midnight," which is the closest the clock has been to the predicted end times in 30 years, according to Fusion.
"It is worth noting that while humans have not yet succumbed to any full-on, post-apocalyptic scenarios, plants and animals are not faring so well. Many scientists believe the planet has already entered its sixth mass extinction, and according to a recent report in Science, more than 75 percent of species of animals and plants could be gone within a few centuries," Fusion's Ari Phillips writes.
"According to the Bulletin of the Atomic Scientists, the danger posed by climate change, the recent North Korean nuclear test, and tensions between the United States and Russia, which remain 'at levels reminiscent of the Cold War,' will be the main factors influencing the decision to adjust the Doomsday Clock or not," Phillips writes.
The timeline and scientific tracking echoes what figures like televangelist Jim Bakker and authors like Michael Snyder and Paul McGuire have noted about current events.
Bakker says he's had many dreams about the future of America.
"Our people were being dominated by people from another land that spoke other languages. ... That's what the Lord showed me," Bakker says.
In another dream, Bakker says he saw a city on fire.
"The unique thing, it was belching out, part of the smoke was pitch black when tires burn rubber. ... I don't know what the black smoke was, but it was a horrible fire. Cars burning, oil tanks exploding. There was extreme black smoke, toxic, so bad that people were fleeing the city," Bakker described.
The dire circumstances, however, could ignite a revival.
"Ultimately, we must remember that—like the children of Israel, the early Christians and the Pilgrims and Puritans who founded America—money is spiritual and all economic prosperity comes from the Lord! We need to seriously pray, repent and cry out to God for a biblical revival and another Great Awakening," McGuire says. "We must remember that God is bigger than the international banking system, but we must stop looking to manmade institutions to save us and pray to God. The Bank of Heaven is not broke!"

Posted by Love For His People ministry at 7:41 AM