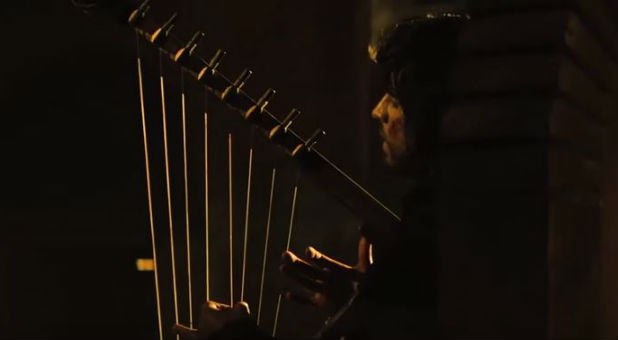 The Bible Series That's Too Edgy For TV

Of Kings and Prophets, a new series set to air on ABC in March, is a Hollywood rendition of the stories of Samuel, Saul and David from 1 and 2 Samuel in the Bible. The show's trailer recently previewed at the Television Critics Association winter press tour.
During the panel with the show's producers and executives immediately following, questions were asked regarding the apparent level of sexual and violent content in the trailer, and what that means for the series. Multiple critics who saw the pilot were surprised by the amount of nudity included, especially considering the fact that Of Kings and Prophets follows the relatively family-friendly TV series Marvel's Agents of Shield on Tuesday nights in March.
Executive producer Chris Brancato said that the series isn't going to shy away from mature content.
"We're going to go as far as we can," Brancato said. "This story is an Old Testament [one that's] violent [and] sex-drenched. It's one of the world's first soap operas. ... You will watch a show that is tasteful but that also tells the story you can read if you want to pick up the Bible."
MovieGuide notes that there's a huge difference between a textual description of events and an actual depiction of acts.
The show's writers are Adam Cooper and Bill Collage, who previously worked on Ridley Scott's Bible-based epic, Exodus: Gods and Kings
Brancato explained that in order to meet the standards and parameters regarding content shown on broadcast television, some of the more explicit content may be edited out for broadcast and only included in online streams of the series.
"We have the wonderful ability to put a show on broadcast and then also have an online streaming version, which has less restrictions ... on it, so it may be that what you saw in this sexual clip in this trailer would probably be in the online version and not on broadcast," he said.
"The love story is essential to this pilot story," Brancato said. "We were seeking in that scene to suggest the pent-up passion and sexuality between these two characters. ... There is no discussion about trying to add more sex or violence for the simple sake of doing so. We're trying to tell the story that is in 1 and 2 Samuel, which has plenty of sex and violence on its own."
Unsurprisingly, and disappointingly, there's no discussion of the real themes of repentance, redemption and walking with God, which is far more intriguing than the sex and violence ABC is trying to sell to the American public.

Want to watch a Hollywood Awards show that celebrates your Christian values? Find out more here!
This article originally appeared on movieguide.org.
For a limited time, we are extending our celebration of the 40th anniversary of Charisma. As a special offer, you can get 40 issues of Charisma magazine for only $40!
NEW from CHARISMA: Do you want to encounter the Holy Spirit and hear God speak to you? Increase your faith, discover freedom, and draw near to God! Click Here
Posted by Love For His People ministry at 8:08 AM