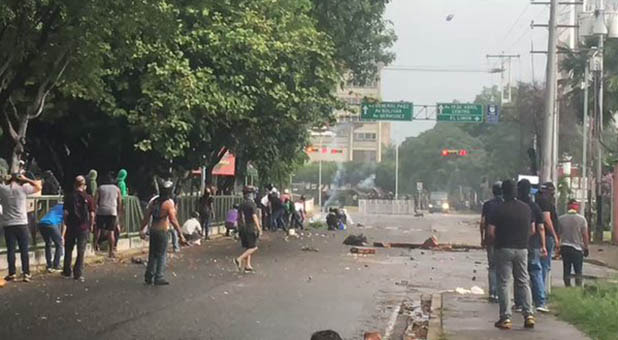 Earlier this month, Kentucky Gov. Matt Bevin addressed the violence that is plaguing the West End section of Louisville with one government program few would expect even the conservative evangelical Christian to propose:
Prayer teams.
In a program he has called "Reclaiming Our Communities," Bevin invited churches and other community groups to commit to "adopt" an inner-city neighborhood block to visit two or three times per week over the course of the next year. They would then "respectfully" walk the perimeter in teams of three to 10 individuals, praying for and get to know local residents.
"I truly believe we're going to see a difference in this city," he said to a group of 400 faith leaders and concerned citizens at Louisville's Western Middle School on June 1. "I personally believe in the power of prayer. I've seen it evidenced in our community and across others."
Almost immediately, liberal activists in those communities, including a number of Christian faith leaders, mocked Bevin's proposal. Joe Phelps, the pastor at Highland Baptist Church and one of the leaders of the EmpowerWest coalition of African-American and Caucasian clergy and churches, wrote that he was "embarrassed" by the governor's "non-plan."
"Gov. Matt Bevin's plan to address violence was a low day for Christianity in Kentucky's Commonwealth," he wrote in an op-ed for the Louisville Courier-Journal. "Moments after his plan was unveiled I was asked for a reaction and responded that the governor's tepid non-plan was an embarrassment to Christianity.
"These harsh words were spoken in frustration in the heat of the moment. But upon reflection, I stand by them. I'm embarrassed that non-Christians will assume the governor's plan, couched exclusively in Christian jargon, represents our only response to violence.
"It doesn't.
"Perhaps this is the extent of the governor's understanding of Christian faith. Or perhaps this is the extent of his capacity to govern. Either way, I was embarrassed. I'm embarrassed that the governor, in his role as governor, lured hundreds of clergy to Louisville's Western Middle School to discuss his plan to end violence."
Harsh words indeed, particularly when they ignore more than half of Bevin's actual message. The prayer teams weren't the only method he wants to use to encourage an end to violence, but they were certainly the most unconventional.
In the same speech at Western Middle School, he also said:
Do we still need economic, political and law enforcement solutions? Of course we do.
This will not take their place, but we feel it will make a real difference.
Phelps' excoriating rebuke of Bevin never included that part of his pitch, and in fact ignored that it was even given—suggesting perhaps he wasn't even in the room and didn't know about it. But his op-ed compounded the problem, because every faith-based outlet that has commented on the governor's proposal since the article was published has ignored it as well.
And there has been a lot of "piling on."
Now, whether they were mocking Bevin because of his belief in the power of prayer, or simply because he's a conservative, they would do well to heed Romans 13. To learn more about his program, visit this website.

Readers are Leaders! Subscribe now and get 3 magazines for the price of 1. Get Charisma, Ministry Today and SpiritLed Woman all for $24. YES - Sign me up!
3 Reasons Why you should read Life in the Spirit. 1) Get to know the Holy Spirit. 2) Learn to enter God's presence 3) Hear God's voice clearly! Click here to draw closer to God!
Posted by Love For His People ministry at 6:59 AM