Arab pastor: Our future is with Israel

Arab pastor: Our future is with Israel

Christians ,  Israeli Arabs
Father Gabriel Nadaf, an Arab Christian priest from the area of Nazareth, told Israeli media a week ago that the future of Arab Christians is in becoming one with the Jewish state.
Israel Today has several times in recent months reported on the activities of Father Nadaf and a growing movement in Nazareth to encourage young Arab Christians to join the Israeli army and fully integrate into Israeli society.
Predictably, that effort has not been popular with Arab Muslims and more antagonistic Arab Christians, and Father Nadaf has received many death threats. The priest has also been forbidden by the Greek Orthodox Patriarch in Jerusalem from speaking further to the Israeli media.
But just days before that ban was imposed, Father Nadaf managed to explain to the Israeli daily newspaper Israel Hayom why he and other Arab Christians are engaged in such a risky endeavor.
"We want young Christians to be completely integrated into Israeli society, and this means also carrying an equal share of the burden," said the fearless priest. "Our future as a Christian minority is wrapped up in the future of the State of Israel."
Contrary to the claims of loud-mouthed Arab members of the Israeli Knesset, Father Nadaf insisted that Arab Christians "feel secure in Israel," and enjoy equal rights, and therefore should shoulder equal obligations.
The battle for the hearts and minds of young Arab Christians in Israel is heating up, and at present far too few are coming to Father Nadaf's aid, whether out of fear or apathy.
While additional Christian support would no doubt be very welcome, what Father Nadaf really wants to see if the State of Israel itself openly and publicly support Arab Christians who buck the anti-Israel trend.
"If our youth see that Israel is supporting their integration into Israeli society, the word will spread," he said. "But, if the state turns its back on us, those who incite [against Israel] will win."
A number of Israeli politicians have come out in support of Nadaf, including Justice Minister Tzipi Livni. Unfortunately, too many still do not see this as a simple black-and-white situation. The bulk of the Arab world, with which Israel is trying to make peace, strongly opposes the kind of integration Father Nadaf is seeking, and so many Israeli leaders feel they must tread lightly.
Meanwhile, a growing number of young Arab Christians are joining Israel's army and boldly speaking out on behalf of the Jewish state. Some are even going so far as to take a Christian Zionist position, noting that Jesus was a Jew, and so their allegiance must lie with the Jewish state.
Hopefully the increased Israeli media coverage of this phenomenon will result in the kind of backing Father Nadaf and others need to keep them in this important fight. 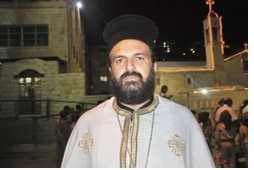 Posted by Love For His People ministry at 7:01 AM