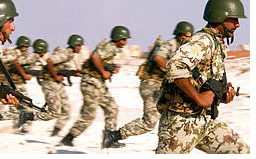 The Egyptian army's new offensive against terror organizations operating in the Sinai Peninsula is well under way, and one of the groups paying a heavy price is Hamas.
Many expected Hamas to suffer as a result of the recent ouster of Egyptian President Mohammed Morsi and his Muslim Brotherhood, which is the parent organization of Hamas.
Over the past several days, Egyptian military officials told Arab media that some 200 gunmen had been killed during battles in Sinai, including at least 32 members of Hamas. The Palestinian group uses the peninsula to smuggle arms and other goods into the Gaza Strip, from where it wages war on southern Israel.
However, the situation remains volatile, and the Egyptian army has asked Israel for a green light to increase its forces in the Sinai. Under the terms of the Camp David Accords, Egypt is permitted to maintain only a very small force in Sinai so as to not threaten Israel's southern border.
Israel is expected to respond positively to the request, as it considers today's Egyptian military leadership to be a partner in the fight against radical Islamists.
There were hints that the Egyptian army could even strike Gaza itself. One official told an Arab newspaper that the Egyptian army had been frustrated by Hamas fighters who use tunnels running under the border to quickly attack Egyptian forces and then retreat to the safety of Gaza.
Posted by Love For His People ministry at 7:19 AM