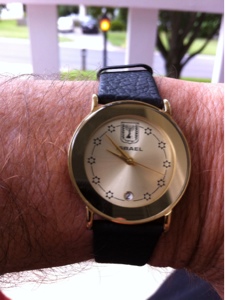 Do you know the time?
Best you are aware of it.

JERUSALEM, Israel -- Persecution of Jews and persecution of Christians: Is there a link between the two? Journalist Lela Gilbert says yes.Gilbert has written extensively about the global assault on Christians around the world. She recently spoke with CBN's Scott Ross about her latest book, Saturday People, Sunday People.

The California author arrived in Israel during the 2006 war with Hezbollah in Lebanon for a three-month visit. Today, she spends much of her time in Jerusalem. She shared with Ross about radical Islamic plans to first rid the Middle East of Jews and then of Christians.But first, she said she has noticed that persecution by Islamists is not the only challenge for Christians in Jerusalem.

Disunity Among Christians
Ross: There are many Christian sects, denominations, etc, in this Land, how are they doing with one another?


Gilbert: Not too well. They're not doing much better than the ones in America.


Ross: It was Nehemiah that said, look we're divided on the wall one from another and how are they going to do battle if they don't have one mind and one strategy, one approach to everything? One! Jesus prayed it.

Gilbert: You know you've got Christians arguing about prophecy, I mean, evangelicals arguing about all kinds of things, much less the old churches who have ancient rifts within themselves - that go back to the fourth century. So it's not surprising but what we know is that we all look pretty much the same through a jihadi rifle site. And maybe we need to remember that.

Ross: Are you hopeful?

Gilbert: I'm hopeful because of my faith in the Lord and in His way of working things out. Politically, I can't understand what's going to happen…my hope is in Him…He's worked in my life in so many miraculous ways that I have to believe He's going to work amongst His people and bring them together and protect them.

Her New Book
Ross: And now out of all this, a book. I was fascinated by the title define that significance.

Gilbert: It's graffiti from radical Islamists that appears throughout the Middle East. In the best terms it says, "First comes Saturday, then comes Sunday." But there's a flag, a photo of a flag in the book that says, "On Saturday we kill the Jews, on Sunday we kill the Christians." And that's where I got the title.

Gilbert said even though many of the world's Muslims are not violent, their voice is drowned out by radical elements.

Video with Gilbert on CBN News

Posted by Love For His People ministry at 7:54 AM