Derek Prince - Israel: Past, Present & Future (1/6) - How I became Involved with Israel (with Chinese subs)

Derek Prince - Israel: Past, Present & Future (1/6) - How I became Involved with Israel (with Chinese Subs) - Derek Prince Ministries videos: DP161, DP162, DP163The name Israel occurs about 2,600 times in the Bible. In this comprehensive series, Derek Prince paints a clear picture of God's dealings with Israel — and instruction on how to pray for Israel. 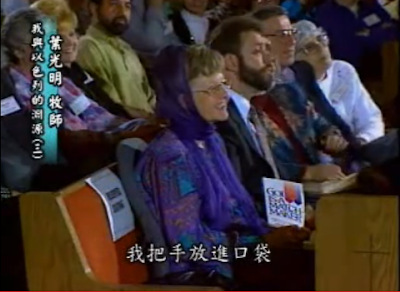 By Cheryl Wilcox and Scott Ross
The 700 Club

CBN.com – It was 1941. The world was at war. In a British army barracks this Cambridge- educated philosopher had a life-changing encounter with God. He simply opened the Bible and read it. He came to the conclusion that Jesus was alive and the Bible was an up-to-date, relevant book. That conviction changed his life forever. His name was Derek Prince.

"I was so ignorant I didn't know you had to go to church to get saved. I mean, I didn't have any spiritual language at all," Derek notes.
Derek was a son of British privilege. Born in India, he was whisked away to boarding school and later Eton.
"I was reading my school reports just two days ago from Eton, I mean years back," says Derek, "and one of my teachers said, 'He had a rather sour outlook on life.'"
He furthered his education at Cambridge and later held a fellowship in ancient and modern philosophy. Then, while defending his majesty's England, he cracked open the Bible.

"I was a professional philosopher before I became a Christian, and philosophers all have problems in their minds," he explains. " I thought, I need something to protect my mind. Then I read in Ephesians 6 'the helmet of salvation,' and being logical by background and by character, I said, 'That's it! The answer for depression is hope.' So I said, 'I'm going to put on the helmet of salvation.' My unit was almost immediately sent out to the Middle East, and I spent the next three years in the desert of the Middle East.
So began the spiritual journey of internationally known Bible scholar Derek Prince.
"In my country people do not know what Coca-Cola is or who the president of the United States is, but they know Derek Prince," says one Siberian national.
On September 24, 2003, Derek died peacefully in his sleep and went home to be with the Father. At age 88, he’d spent nearly six decades in ministry. He had finished his race on the eve of the Jewish New Year, Rosh Hashanah, or the Feast of Trumpets. His body was buried in Israel, his adopted homeland for more than 20 years. In his last interview with The 700 Club, Derek talked about his deep love for the Jewish people.
"Without the Jewish people, we'd have no patriarchs, no prophets, no apostles, no Bible, and no Savior. How much salvation would we have without that? So we all owe an infinite debt to the Jewish people," he says.
Earlier this month, Derek was memorialized in Charlotte, North Carolina, home of his North American ministry. Family, friends, and co-laborers in Christ celebrated his life and ministry to the nations.
"The name of Derek Prince became a synonym around the world for integrity and for courage, courage to speak on Bible topics that most preachers were afraid to think about, let alone teach," says John Hagee at Derek's memorial service.
"Friends, I am hear to tell you that the same Derek Prince that I lived with at home in Jerusalem was the same man you saw in the pulpit," Barry Segal told the congregation at Derek's memorial service. "He was without guile, and he was without hypocrisy."
"A prolific writer, Derek authored more than 40 books, including his hallmark work, Shaping History Through Prayer and Fasting. He recounts the great move of God he witnessed while teaching in Kenya during the late 1950s and early 1960s.
"Prayer and fasting," says Derek, "definitely made an impact for one generation on that nation of Kenya."
Today, Derek's teachings are broadcast by radio around the globe and translated into Arabic, Chinese, Croatian, Malagasy, Mongolian, Russian, Samoan, Spanish, and Tongan.

Grandson Derek Selby recounts what his grandfather told him about his legacy: "It is my desire, and I believe the Lord's desire, that this ministry, Derek Prince Ministries, would continue the work God started through me until Jesus returns."
But Perhaps Derek Prince's teachings, his books, or his ministry to the body of Christ are not his greatest legacy. Instead, it is the extraordinary example of his family life.
"I was married to Lydia for 30 years and to Ruth for 20. And each of them was a happy and successful marriage," says Derek. "The most painful thing in my life has been the death of Lydia, and even more, the death of Ruth. With Lydia, I was a part of a big family, but Ruth and I were, basically, two people on our own. We had that big family, but I have never had such a close, personal relationship with anyone in my life as I had with Ruth, and losing her -- I won't say losing her; the Holy Spirit rebuked me by saying, 'You haven't lost her. She has gone ahead. She will be waiting for you.' But I am just so sorry for people who aren't ready for the issue of death because if it doesn't come to me, it is going to come to my wife. Death is part of life. That is the way it is because of our sin. Thank God Jesus has taken the sting out of death. We are going to have to die, but Paul says that we don't have to mourn like others because we have a glorious expectation."
Derek's passion for fatherhood is also a living legacy to the body of Christ and an example for other leaders to emulate. While on his tour of duty in Palestine, grandson Derek Selby explains, "He came to a children's home that a lot of soldiers would frequent for prayer meetings. That home was run by a Danish woman named Lydia Christinson, who had already been there for 15 years on her own in Jerusalem. The day that Lydia and Derek got married, he immediately became the father of eight adopted daughters. One is British, one is Palestinian Arab, and six of them are Jewish girls."
When Israel declared statehood in 1948, the region erupted in war. Derek Prince and his multi-racial family were forced to flee the country because of threats against their lives.
"In the middle of the night, Derek lead his wife and eight daughters into the streets with nowhere to go and left everything they had in the home, which wasn't much to begin with, to protect his family and get them to safety," says Derek Selby. "That eventually led to them coming back to England, where Derek's preaching ministry really began."
One of Derek Prince's adopted children, Anna Selby, remembers her father affectionately.

"I don't recall when he came to the home in Ramullah," Anna says. "I just remember that he was always there for me, and he has always been there as my daddy. He was a great dad, big supporter. I shall miss him dearly."
Derek and Lydia bonded with their ninth adopted child in Kenya. Her name was Jessica.
"They went to my parents and said, "We heard that you take in children. They are much older now' They said, 'We no longer do that. We are missionaries. We no longer take in children.' They got up to leave, and as they went to the door, my hand went out to my father to say, 'What are you going to do with me?'" says Jessica Sorenson. "What you saw in the pulpit is what you saw at home. He was the same man. He wasn't two different people. What I remember about my father is that he was a loving man. I knew that I was loved by my father, and I think he loved me when others didn't love me. That has always touched me. He loved me and he instilled faith."


Derek Prince: father, friend, and teacher to the nations.
Posted by Love For His People ministry at 7:37 AM